Bread made with spent grains, the residual malt left over from the beer brewing process, not only tastes very tasty traditionally, but is also very healthy because of the many fibers and because of the beer also has a longer shelf life.

You have probably never heard of spent grains, even though this by-product of the beer brewing process has been made for centuries. Whether made, it actually remains after the beer is brewed and is thrown away as waste or used as animal feed. And that is precisely the reason that it is little known as an ingredient for bread. Because unknown makes unloved and in this case also vice versa. Bostel usually goes into the garbage can, into the compost heap or is processed into animal feed.

And that’s a shame, because it contains a lot of nutrients such as protein and fiber. In addition, bostel has a rich taste. As an experiment, I baked some loaves of bread with this exciting ingredient.

First get the brush…

The first challenge was to get brush. That turned out to be the case in practice. If you search for it on the internet, you will find that quite a few people brew their own beer and discuss with each other on forums what they do with the spent wood. Compost heap is a common solution. In addition, more and more small breweries are appearing in the regions and contact with them is more accessible.

The Jopen Brewery is located in Haarlem. Once founded by someone who wanted to brew old recipes again for an anniversary of the city of Haarlem. Those beers turned out to be so tasty that there was a permanent demand for them. The Jopenkerk is now a grand café and brewery in one. 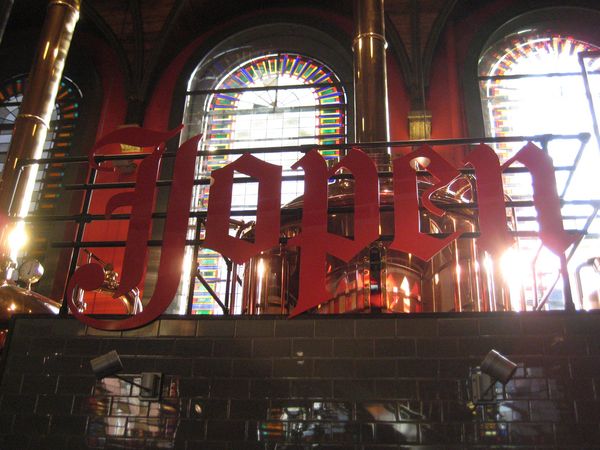 Getting started with the brush

On request, the brewer opened the side door of the church where a large pipe drained the spent grain and thin beer. The brewer held a plastic bag under the pipe and drained a bag full of spent grain with thin beer. hot! Quickly in the colander to drain the excess moisture. Then the spent grains are added to the dough while still warm: perfect for fermenting!

Very important: finely grind the spent grains in the food processor. There may be sharp husks in it and that is not nice in the mouth and between the teeth. While you’re busy with the brush, it’s nice to add beer to the dough. If you want darker bread, use dark beer. For lighter bread, use lighter beer. Let the yeast ferment for a while with some sugar in the beer. Depending on how moist your spent grains were after draining, you can add some extra beer or flour. You will notice during kneading whether the dough is too dry or wet.

See opposite for all ingredients (or below in the mobile version)

Knead the dough for ten minutes and let it rise for an hour and a half in a warm place under a tea towel or in a bowl with foil over it. Then knead again and form a loaf. Let it rise for another half hour. Preheat the oven to 200°C and bake the bread in the middle of the oven for 55 minutes.

During the last 15 minutes, check regularly whether the bread is ready by tapping the crust. If it sounds hollow, the bread is already done. If necessary, turn it so that all sides are evenly browned. Let it cool down and… done!

This website  contains an overview of the (more than 100) breweries present in the Netherlands.

Source: Culy by culy.nl
*The article has been translated based on the content of Culy by culy.nl If there is any problem regarding the content, copyright, please leave a report below the article. We will try to process it as quickly as possible to protect the rights of the author.

Thank you very much!

Fett’unta with burrata, tomatoes and pesto